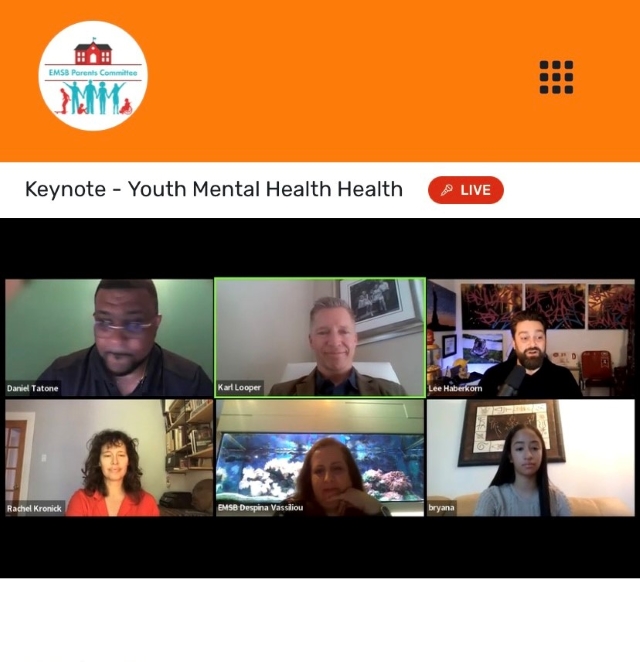 Mental health amongst our youth was the topic of conversation on Sunday, May 29 during the keynote address of the EMSB’s Virtual Parent Conference. The conference, in its fifth edition, was organized by the EMSB Parents Committee.

Mr. Haberkorn began by sharing his own personal struggles with mental health, including a near suicide attempt, bouts of depression and anxiety as well as addiction to drugs and alcohol. Although appearing happy to others on the outside, the one-time Elizabeth Ballantyne Elementary School student says, internally, it was an entirely different picture.

“I was fuelled by insecurities and that got the better of me,” said Mr. Haberkorn. “I didn’t realize the support I actually had around me that I could have reached out to, whether it be teachers, friends and family. I thought I’d be judged and seen as an outcast for talking about what was really going on inside of me.”

Mr. Haberkorn credits the psychiatric team at the Jewish General Hospital, where he was initially treated, with helping him begin his road to recovery. While he has overcome his struggles, he knows of many others who have not. As a result, he has dedicated the last decade of his life to mental health causes.

“If I can help just one person along my journey, it makes all the struggles I have been through worthwhile,” he said.

The mental health picture at the EMSB

“Initially, when the pandemic hit and we all went home, there was a sense of calm,” said Dr. Vassiliou. “I would attribute this to the reunification of families and being in a protective and healing environment.”

Dr. Vassiliou says students had mixed reactions to online learning. Upon the return to classes, teachers and eventually students also experienced challenges of their own, as many had trouble managing their emotions and/or were dealing with anxiety and depression.

Dr. Vassiliou says the loss of sports and other activities, such as arts and music, has had an effect on youth. Above all else, she says the increased screen-time of today’s children, further exacerbated by the shift to online learning, has negatively impacted the overall mental health of students.

“We need to encourage screen-free play time,” she said. “I often advocate for family game night with your children or engaging in outside activities, such as going for a walk or a bike ride. Those are good ways to interact and socialize with one another.”

She says it is normal to feel stressed and anxious as a result of COVID-19, but it becomes alarming should it last for a prolonged period of time. She advises speaking with your child’s pediatrician, school psychologist or guidance counselor in the event of persistent anxiety and stress.

“Every time we go through a negative event, we learn something,” she said. “When we get to the other side, we will have learned new skills. Most people will recover. There’s always hope, growth and recovery.”

Meanwhile, at the Jewish General Hospital…

Dr. Kronick admits she and her colleagues are working through “very challenging times.” She points to social movements, systemic racism and gun violence as additional stressors in addition to the pandemic.

While there has been a noted decrease in drug and cigarette use as well as in teen pregnancy rates, Dr. Kronick says there is a rise in suicidal thoughts and behaviors “in quite a dramatic way,” resulting in an increase of psychiatry visits to the ER.

Dr. Kronick is also greatly concerned with the lack of sleep amongst children these days.

“Clinically, it is extremely rare that I see a child who is sleeping enough,” said Dr. Kronick. “Most are even lacking several hours of sleep per night. Help make sure your kids sleep.”

Dr. Kronick says it is important for parents to hold their children close and be more “powerful” than the social media platforms used by their children. She also notes the importance of school in this equation.

“School is medicine,” she said. “You may be trying to avoid school because it stresses you out to some degree, but we know the communities you create at the EMSB and networks of care can be extremely healing for parents and families. School is an important buffer for children.”

Dr. Looper, too, has noted profound effects on mental health throughout the pandemic.

“Most people will rally whatever strength and resources to deal with a crisis,” said Dr. Looper. “As time goes on and there is a persisting level of stress, we begin to see the mental health effects.”

Although he works primarily with adults, Dr. Looper says his experiences with his three children and the cancellation of trips, athletic events, celebrations and other milestone events have demonstrated the immense impact the pandemic has had on youngsters.

“Young people are developing their identities, skills and views of the world,” he said. “All of this is very much influenced by the experience of the pandemic.”

Seventeen year old Bryana Catedral-Sansalone says she has had her own fair share of sadness and hopelessness throughout the pandemic.

“We lost all social contact, connections, and interactions that we hoped for,” she said. “A big part of school are the extra-curricular activities because it helps us build relationships. It is an enjoyable thing to look forward to every day. The pandemic really took that away from us.”

She credits Lester B. Pearson’s Zen Zones, guidance and drug counselors in helping her and her peers cope with their anxiety and feelings of loneliness. She suggests students not shy away from talking with their parents about their struggles.

“Even though we are living in a time of uncertainty, we should just hope for the best and understand that it’s going to get better,” she said. “There is always a rainbow after the storm”

About the EMSB Parents Committee:

The EMSB Parents Committee (formerly Central Parents Committee) is a government-mandated body that represents all EMSB parents by informing the EMSB of parents’ needs, advising the EMSB, representing parents on EMSB committees & the Council of Commissioners, promoting parent participation and informing parents of relevant issues. The committee meets once a month. It began its Parent Conference in 2017, wanting to offer parents a free event at which they could educate themselves on a variety of topics relevant to parenting.